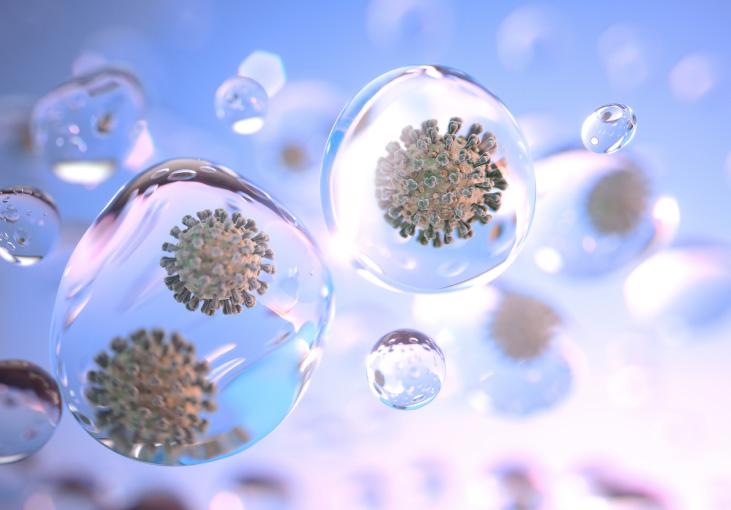 Micro-droplet suspension in the air

Invisible micro-droplets, about 0.1 micrometer which is just 1/20th of the size of human hair can transmit infectious disease pathogens and microorganisms in the air when you come in contact with them. This means when you touch an object, stay close to a person or stay in an infected room, micro-droplets suspend themselves in the air and effectively flow around. This transmits disease-causing microorganisms, leading to complicated fatal respiratory diseases.

How microorganisms are transmitted as aerosols

Sneezing causes extremely small particles of about 10 micrometers to float in the air. These particles are very small and light and so, they start drifting in the air until the micro-droplets are evenly distributed before taking to the ground. The problem is micro-droplets carry viruses and disease-causing microorganisms when they are suspended in air, people inhale them and the pathogens are spread. When a person sneezes in an airtight room, about a hundred thousand particles spreads, most of which contain liquid and some aerosol which falls to the ground, while the extremely tiny particles containing virus and bacteria drifts about in the air. These particles float and drift for about twenty minutes and completely diffuse in the air, getting evenly distributed in the room.

Although, the volume of micro-droplets that leads to infection is unknown, it is very important to employ safety measures to reduce and eliminate the risk of infection from micro-droplets circulating in the air. This can be done by completely eliminating microorganisms in circulating air. Microdroplets float and drift in the air because of air circulation.

The AiroDoctorⓇ completely eliminates microorganisms transmitter in the air through micro-droplets. It filters the air completely, killing all disease-causing airborne viral bacterial nanoparticles making the air totally safe for breathing and eliminating the risk of contracting all airborne diseases.

The world's first air purifier equipped with a filter that has been proven by a government research institute to remove coronavirus aerosols from the air.